This summary is based on the course “Parallele Programmierung (ParProg)” at the HSR in Rapperswil. I visited the course in this years spring semester and now I want to make a little summary.

We work with Java, but the principles can be transfered to other languages.

There are often confusions with the terms ‘Parallelism’ and ‘Concurrency’. This terms actually mean not the same, but they are two aspects of the same principle.

Parallelism basically means the splitting up of a process in simultaneously executable and collaborating sub-processes.

Concurrency means that two processes can start, run, and complete in overlapping time periods. They are independant but they compete for shared resources.

A Process is a heavy weight program instance. Each process has his own address space.

A Thread in contrast is a light weight parallel program instance inside a process. Threads share the same address space.

Create a thread in Java

Implement a thread in java:

A real thread is started only if you call the start() method. The start() method calls the run() method of the thread. If a thread throws an unhandled exception, all other threads are still running.

As an alternative to extend the class Thread, you can implement the Runnable interface.

Ad-Hoc implementation of a 1-Method interface:

With Thread.sleep(milliseconds) you can put a thread in the waiting state. After milliseconds he will go to ready state again.

Threads have to share their address space and heap. They can access same objects and variables. That’s why access to resources have to be synchronized enough, otherwise race conditions are possible. (uncontrolled or wrong interactions between threads)

Methods or code blocks which should be executed by only one thread at one time are called Critical sections. No parallel execution should be possible for this sections. (mutual exclusion)

With the synchronized modifier, the body of a method is marked as critical section:

How does synchronized work?
Each object has a lock (monitor lock) and only one thread at a time can have this lock. If a thread enter’s a synchronized block he takes the lock if it’s free. Otherwise he has to wait until the lock gets free.

If you add the synchronized modifier to multiple methods in the class, only one thread can enter one of this methods at one time.

With synchronized statement blocks you can mark critical sections inside methods. Additionally you can define the Lock-Object explicitly.

In this example we make a monitor lock on this:

With the Wait & Signal mechanism threads can wait for conditions. Threads can also signal other threads to wake up.

A semaphore is an object with a counter that counts the amount of free resources. With the acquire() method you can get one resource and the counter decrements. release() passes the resource back and the counter increments. 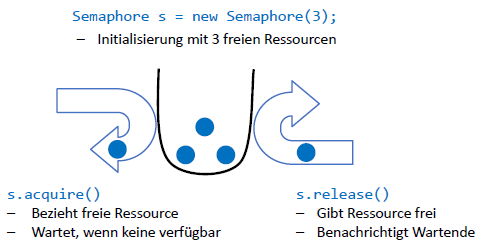 A semaphore with a counter which can only be 0 or 1 is called Binary Semaphore.

By default the semaphore in Java is not fair. If you like a fair semaphore you have to pass an additional parameter to the constructor:

In this case the semaphore uses a FIFO queue.

You can also acquire and release multiple resources:

The Lock & Conditions primitive is basically a monitor with multiple waiting lists for different conditions.

Mutual exclusion often is not needed for read access but for write access. In this case you can use ReadWrite-Locks.

A count down latch is a synchronization primitive with a counter. This is used if all threads wait for one single condition. When the condition is fulfilled, all threads will work further. The counter can be decremented by threads with the method countDown(). Threads can wait until the counter is zero with the await() method.

Latches can only be used once. You cannot reset the counter. If you need a new synchronization you have to create a new latch.

The barrier closes automatically for next round: 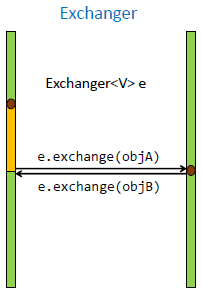 What are possible problems if we have concurrency?

A program with race conditions is incorrect. There can be errors from time to time, but they are usually very hard to find.

Data races happen if threads access shared variables or objects and there is at least one writing access. (Read-Write, Write-Read, Write-Write)

Should we synchronize everything?

It does not help if we just synchronize all methods. There can be semantically higher race conditions anyway and the synchronization is very expensive. (costs)

Structure guarantees that object is only accessed by one thread at same time.

Why are the modern collections in java.util not threadsafe anymore?

It’s also possible to use wrappers which synchronizes all methods. The elements are still not synchronized! (available for List, Set, Collection, SortedList, SortedSet)

What’s the problem here? In the worst case, thread 2 will lock listB directly after thread 1 locked listA. That scenario will block both threads because thread 1 is waiting for listB and thread 1 for listA.

Programs with potential Deadlocks are incorrect:

If threads block each other permanently but still use CPU, this is called livelock. Example:

Starvation means that a thread never gets a chance to access a resource.

Starvation is a liveness / fairness problem:

How to avoid starvation?