With my term project “A Domain-specific Language for Service Decomposition” I worked on an approach aiming to formalize an interpretation of the strategic DDD patterns and how they can be combined. The resulting Context Mapper Domain-specific Language (DSL), provides a foundation for structured service decomposition approaches such as Service Cutter. The decomposition of applications into appropriately sized services towards Service-oriented a.k.a. Microservice architectures is challenging. The DSL allows to create DDD context maps and use them as input for the Service Cutter tool. Other decomposition approaches using the DSL will follow with the next project. You can further convert the context maps into PlantUML component and class diagrams. The full project report is published by HSR and can be found here.

DDD provides an approach to decompose a domain into multiple bounded contexts. Thereby its patterns and especially the bounded contexts have gained more attention within the last years, due to the Microservice architectures trend. At the same time, there are different interpretations and a certain ambiguity regarding the original pattern definitions of Evans and how they can be combined. Therefore, this project aims to provide a formal definition of such an interpretation. Note that it reflects my interpretation based on the DDD literature such as Evans, Vernon, Brandolini, personal experience and inputs of my project supervisor. I’m very interested in other opinions and I see the Context Mapper project as a work in progress which hopefully will be developed further by incorporating valuable feedback out of the DDD community.

The following domain model illustrates the structure on which the Context Mapper DSL is based on. The model’s main object is the context map which contains multiple bounded contexts and their relationships. Each bounded context implements parts of given subdomains.

There are different opinions on how these strategic DDD patters can be combined. This approach and the implemented Context Mapper reflects my interpretation based on the DDD literature. The meta-model above already implies certain rules regarding applicability.

The special case of a Customer/Supplier relationship probably raises the most questions regarding combinations with the other relationship patterns. In my opinion, the combination with the OHS pattern leads to contradictions and it is therefore not allowed within the Context Mapper DSL. Whereas the Customer/Supplier pattern says that the supplier has to prioritize his implementation tasks according to the wishes of the customer, the OHS pattern somehow implies that the upstream implements “one solution for all” downstreams. This would mean that the supplier has to consolidate all the wishes of many different customers into one single API, which is not a very likely scenario from my experience. At some point a customer will have some special requirements which are not needed by the other customers and an implementation within the same public API would pollute the API which should be kept clean. In this situation the upstream team may implement another specialized API for that customer and that special purpose. However, in this case the relationship between this downstream/customer and the upstream/supplier implementing the OHS is no longer clearly defined by the communication over the OHS and it would be misleading to declare it this way.

A Domain-specific Language (DSL) as a formal approach for DDD

The Context Mapper DSL provides a tool to create context maps according to the meta-model introduced above in a formal manner. In the examples repository you can find two examples for such context maps. The first is based on a fictitious insurance company and the second on the DDD Sample Application.

The following illustration shows the context map of the insurance scenario inspired by the representation of Vernon and Brandolini. The complete example and short descriptions of the bounded contexts can be found here.

This context map can be described in the Context Mapper language (CML) as follows:

The asymmetric relationships are declared with the <-> arrows in both directions, whereas the Upstream/Downstream relationships are declared with an arrow (<- or ->) pointing from the downstream towards the upstream (illustrating the dependency). Check our Language Reference for more details about the language. Further note that the example above does not contain the bounded context specifications. The complete CML code of the example can be found here. With the integration of the Sculptor DSL, CML allows to specify the bounded contexts in terms of the tactic DDD patterns.

A model written in the Context Mapper DSL can be used as input for Service Cutter in order to improve the boundaries of the bounded contexts in terms of Service Cutter’s coupling criteria. The following illustration shows the Service Cutter result for the insurance example introduced above. 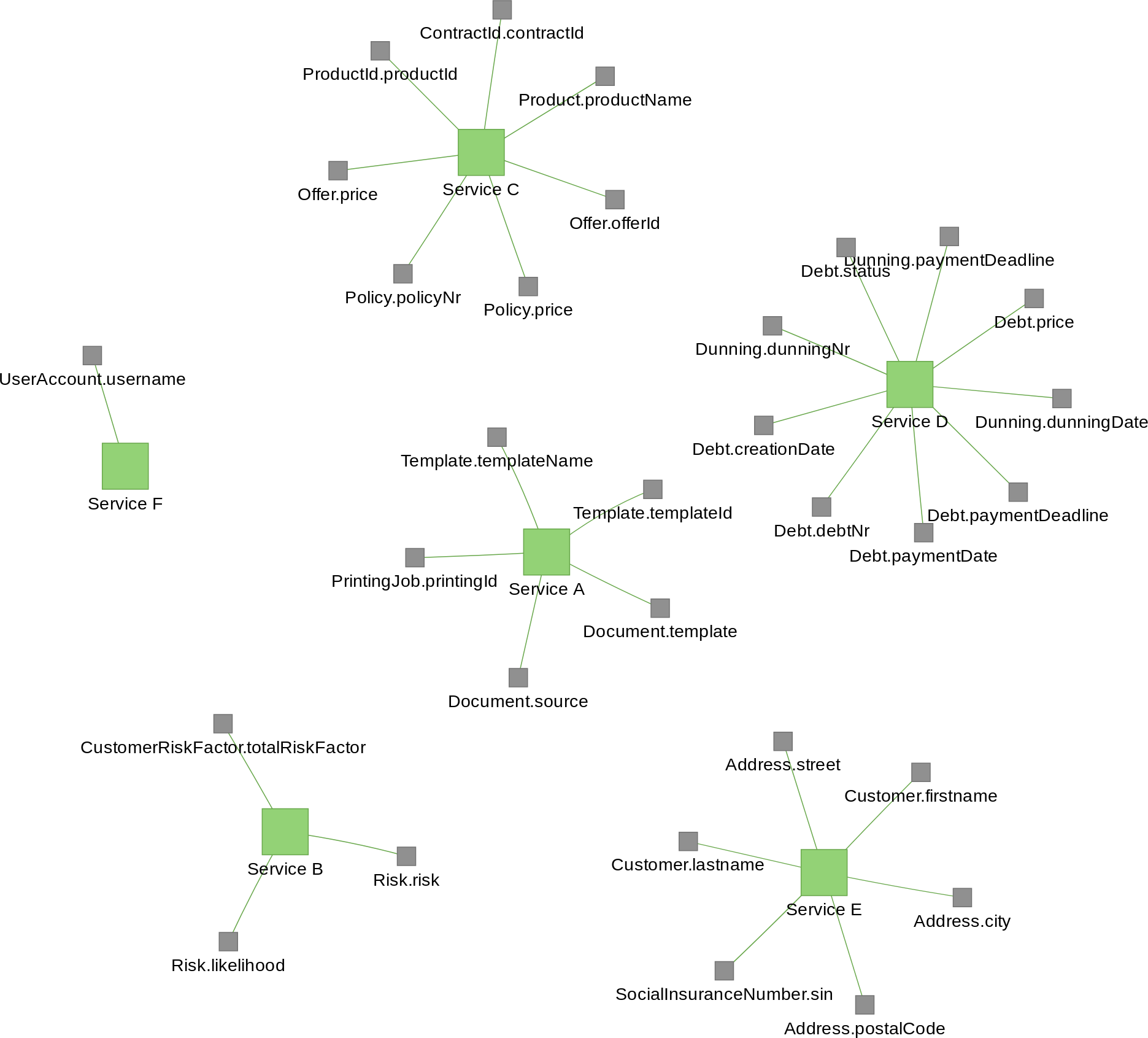 A DSL offers the possibility the transform your model into any other representation. Besides the transformation into Service Cutter input files, Context Mapper currently allows to generate PlantUML diagrams as graphical representation of your context map. The generator creates a UML component diagram, illustrating the bounded contexts as components. It further creates corresponding interfaces and connections between the components according to the bounded context relationships.

The following image shows the generated component diagram for the insurance example: 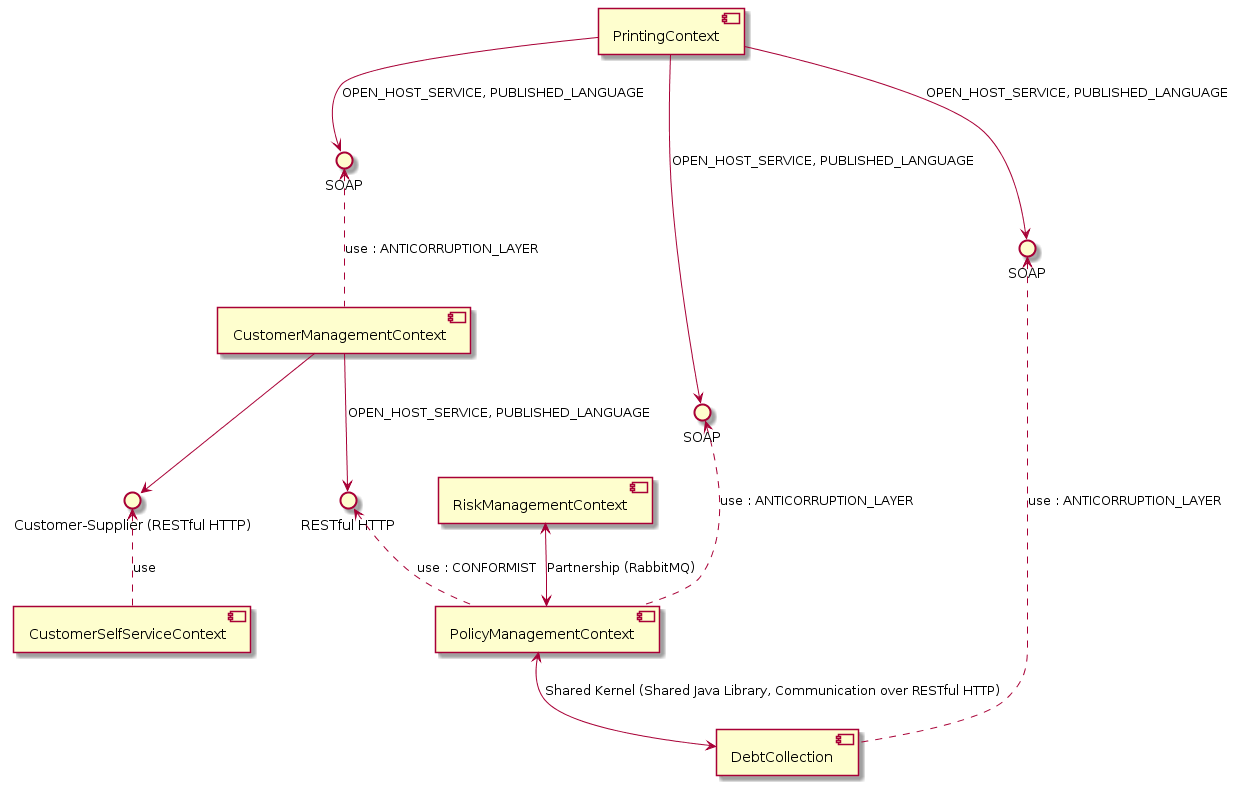 The generator further creates a UML class diagram for every bounded context. This page describes how you can generate the UML diagrams out of context maps written in Context Mapper DSL.

In the next term project, starting in February 2019, our goal is to work on other service decomposition approaches using the presented DSL. By applying architectural refactorings a context map written in the Context Mapper DSL could be decomposed by splitting and merging bounded contexts stepwise. Other structured decomposition approaches such as Service Cutter using other algorithms and heuristics could be applied as well.

Other future projects implementing other generators would be conceivable. Such transformations could provide the possibility to generate other graphical representations or code. A code generator which creates microservice stubs (project templates) for the modeled bounded contexts might be an interesting feature.